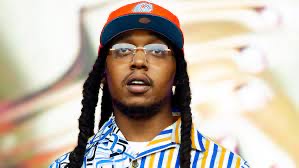 During the early hours of November 1st 2022, Hip Hop lost one of its most humble and talented souls. Kirshnik Khari Ball know to his fans all around the world as Takeoff, member of one the most influential Trios in Hip Hop history passed away after he was shot in Houston after what many speculate as a dice game gone wrong. The talented rapper who was born and raised in Lawrenceville, Georgia first came to prominence with his Uncle Quavious “Quavo” Marshall and his cousin Kiari “Offset” Cephus when the trio began dropping mixtapes in 2011, Juug Season, then later No Label in 2012. In 2013 they crossed over into the mainstream when their song “Versace” was remixed by Drake, the song peeked at 99 on the Billboard 100. From there the group exploded, their next album Yung Rich Nation peeked at 17 on the Billboard 200. A slew of collaborations would follow that would plant the crew in the perpetual spotlight.

Bad and Boujee would be the next single to explode with the help of Lil Uzi Vert, though Takeoff did not perform a verse on the song, he infamously defended his position within the group when he responded to critics who questioned the move, “Do it look like I’m left off Bad and Boujee?”. It certainly did not. Their momentum could not be stopped and the trio steamrolled to number 1 with their album Culture. Their next album Culture II would continue to dominate the charts in 2018. Following the success of the groups album, Takeoff decided to showcase his talent with a solo album, his first single Last Memory and the  album The Last Rocket was released to much critical acclaim.

Culture III which the Migos released in June 2021 would be the groups final album together. In 2022, plagued by rumors that swirled around a fracture in the relationship between Quavo and Offset, the group split. Quavo and Takeoff released an album together named Only Built for Infinity Links. The Uncle and Nephew duo was heralded for the albums release, and the single Hotel Lobby was making a big impact on the industry. Takeoffs prowess as a songwriter was put on full display with the album, N.O.R.E. complimented Takeoff on his show Drink Champs to which Takeoff responded “Enough is enough, I’m chill, I’m laid back, but its time to pop it, its time to give me my flowers, I don’t want em later when I ain’t here”. Those words would resonate heavily in the days following his murder.

As for the shocking murder of Takeoff, the world was left speechless. Takeoff had no enemies, showed no jealousy, was a quiet person who only showed his big personality to those closest to him. So what happened? What caused this tragedy? The internet investigators have settled on the sacrificial Illuminati theory that prevails when any rapper dies before his time or is gunned down, but the truth is more simple and much sadder.

We know from instagram story videos and leaked TMZ footage that Quavo and Takeoff were in Houston riding around with Jas Prince son of Rap A Lot Records Owner Jay Prince. We see in footage from later that night from TMZ that Quavo appeared to be arguing with someone, many witnesses say he was arguing with Jas Prince he walks out of view, shots were fired, and then more shots fired resulting in the death of Takeoff, the resounding opinion is that he was killed from friendly fire, caught in the crossfire. This has resulted in the internet going crazy with speculation. One thing is for certain Jas Prince was not at home when the shots were fired as he had previously tweeted. Judging by the letter of condolence Jay Prince posted on his instagram there was no reason something like this should have occurred. The internet agreed, Sauce Walker made some searing allegations, stating that had they been in Houston with him instead of Jas Prince, Takeoff would still be alive, to which Jas responded “what you tryna say?”.  The investigation is ongoing, but the internet makes keeping secrets very difficult in this day and age, and it is very possible we might see a conclusion to this investigation soon.

As rumors and speculation swirl around the surviving Migo members a private ceremony was held for Takeoff today November 11th in Atlanta. Cardi B, Offset and Quavo were spotted heading to his funeral service which was held at State Farm Arena. The motorcade of cars and Takeoffs Hearst were seen driving through Atlanta, a scene reminiscent of the day they put Nipsey Hussle to rest in Los Angeles. It has been reported that many celebrities were in attendance and that even Drake wrote a poem to Eulogize the late rapper.

The culture of Hip Hop owes its gratitude to Takeoff for his commitment to his craft, his family and the city of Atlanta. He was a larger than life figure who stayed humble and never lost himself to the pitfalls of fame and extravagance. The public outcry over his passing is a touching example of the flowers he deserved that we were just beginning to give him. He deserves all the praise, our prayers are with his family.